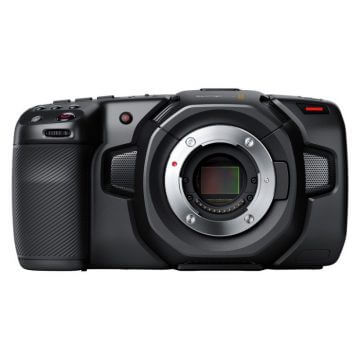 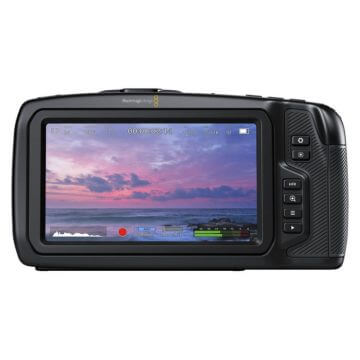 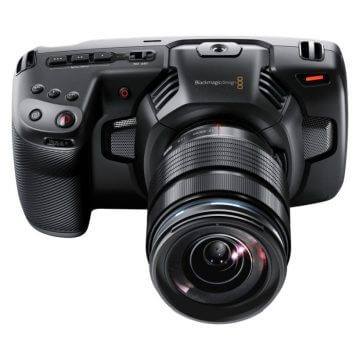 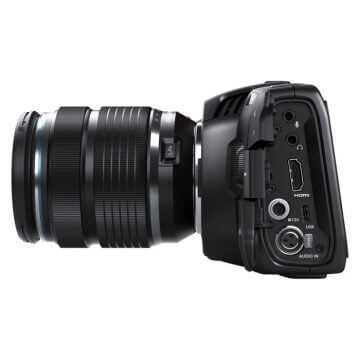 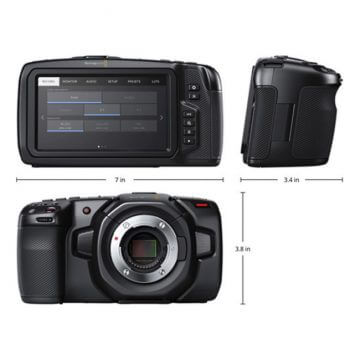 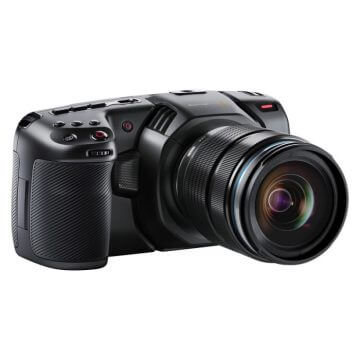 So you get spectacular HDR images and superb low light performance!

The peripheral controls give you speedy access to vital functions, while the big 5 inch touchscreen makes it simple to frame shots, focus precisely and modify camera settings. Images are recorded onto typical SD/UHS-II or CFast 2.0 cards in Blackmagic RAW and ProRes at up to 120 frames per second.

In addition, the Blackmagic Pocket 4K has;

The transportable handheld design of the Blackmagic Pocket Cinema Camera gives you amazing agility without surrendering features. The very compact form factor features a carbon fibre strengthened composite body that makes it very strong and lightweight so you can take it anyplace.

That means you can swiftly check framing and focus, capture audio and record your files without having to carry around additional monitors, microphones, recorders and cables.

You also get loads of mounting points, a mini XLR input with phantom power, bluetooth control and lots more.

Specialised Features For A Great Price

The Blackmagic Pocket Cinema 4K offers you the specialised features you need, all in a transportable and reasonably priced design that can be used anyplace.

That means you get the image quality you need to flawlessly mix footage from the Blackmagic Pocket Cinema Camera 4K with other types of cameras used on high end Hollywood feature films and episodic television shows!

The new Blackmagic Camera 6.2 update adds support for Blackmagic RAW to the Blackmagic Pocket Cinema 4K, giving you the benefit of full, visually lossless camera RAW images, with the magnitude and swiftness of traditional video file formats! Because the files are so small, you’ll be able to record extended programs on the media you now have.

You’ll also be able to alter parameters such as;

You’ll be able to choose between 3:1, 5:1, 8:1 and 12:1 constant bit-rate recording, or amongst constant quality Q0 and Q5 recording. With Blackmagic RAW 12:1, you can record more than two hours of 4K DCI film to a single 256GB SD UHS-II card, giving you fabulous cinematic quality images on very small, low-cost cards!

The Blackmagic Pocket includes a complete version of DaVinci Resolve Studio, which is a comprehensive post-production solution. You get the world’s most innovative solution that combines specialised editing, colour correction, audio post and visual effects all in one program.

With DaVinci Resolve you can edit native video from your camera and hold every bit of quality. It is used to finish more Hollywood feature films than any other solution, so you’ll get the best possible post-production tools. Whether you’re working on a major Hollywood feature film, episodic television production, music video, commercial or even your latest YouTube shoot, DaVinci Resolve Studio gives you a totally lossless workflow for;

So your video continually looks as good as possible!

The Blackmagic Pocket Cinema uses typical changeable LP-E6 type batteries. You also get a fastening DC power connector so it can’t be unintentionally detached in the middle of a shoot. The included 100 ‑ 240 volt plug pack can be used to at the same time power the camera and charge the LP-E6 battery. Plus, it includes international socket connectors so it can be used anyplace in the world!

The USB-C Expansion Port receives power so you can charge the battery from;

The Blackmagic Pocket Camera gives you an extensive array of flexible power options so you can shoot all day!

Even though it’s small and transportable, the Blackmagic 4K has a full size HDMI connector built in!

You get support for innovative features such as HDR output and a clean 10-bit output with on screen overlays showing full camera status, making it seamless for on set monitoring.

The camera features a mini XLR input with 48 volts of phantom power for linking professional microphones such as lapel mics and booms. There are also built in microphones with a very low noise floor so you can capture great sound on location! There’s even a 3.5mm stereo audio jack so you can use diverse types of video camera microphones.

The back of the Blackmagic Pocket Cinema Camera 4K features a marvelously bright, big 5 inch touchscreen. This makes it simple for you to frame shots and precisely focus, without having to carry around an exterior monitor or viewfinder! Plus, the speaker located near the screen makes it simple to swiftly play back and review shots on set!

You get the same menus and interface found on URSA Mini cameras which  include;

In addition, you can apply 3D LUTs so you can monitor the shot with the anticipated colour and look. Not only can you use the 3D LUT for monitoring, it can also be baked into the recorded footage.

The Blackmagic Camera uses the equivalent Blackmagic OS as URSA Mini Pro. That means you get the world’s most innovative camera operating system and numerous of the same professional features found on bigger cameras! If you’re just starting out, you can learn how to use the Pocket Cinema Camera 4K now and move up to an URSA Mini when you’re ready! If you now use a URSA Mini, there’s nothing new to learn! You get an up-to-date touchscreen interface that uses simple tap and swipe signals to change settings, add metadata and view recording status.

The Blackmagic OS gives you excellent control of cutting-edge camera features including;

USB-C Is Quick, Flexible And Powerful

The Blackmagic Camera features an pioneering high speed USB-C Expansion Port. USB-C is quick, flexible and even provides power, so it’s rapidly becoming the norm on all recent computers and devices. The huge bandwidth of USB-C makes it possible to link exterior accessories such as flash drives and SSDs for significantly lengthier recording times. This can be significant when shooting 12‑bit Blackmagic RAW or high quality lossless 12-bit RAW or even high frame rate 60 frame per second 4K. Additionally, when you’ve finished shooting you can use the same drive for editing and post production!

Compatible With All Professional Post-Production Software

When it comes to recording, the Blackmagic Pocket 4K gives you 3 kinds of media to choose from. Images can be recorded on to typical SD cards, faster UHS‑II cards or CFast 2.0 cards. High definition video can be recorded using regular low-cost SD cards while higher performance UHS‑II and CFast cards can be used for recording 4K DCI in all maintained formats and frame rates. With Blackmagic RAW 12:1, you can even record 4K DCI images to an SD UHS‑II card, giving you spectacular cinematic quality images on very small, low-cost cards. For lengthier recording times, you can also record directly to an external SSD or flash disk using the built in USB‑C Expansion Port! Best of all, there’s nothing proprietary; the files will be compatible with all professional post-production software applications. You can also mount the media cards on your computer and start editing straight from them using the included DaVinci Resolve Studio software!

Utilise The Lenses That You Already Have

The Blackmagic Pocket Cinema Camera uses the same MFT (micro four thirds) lens mount as the original Pocket Cinema Camera so you can utilise the lenses you already have! The MFT lens mount was intended precisely for smaller camera bodies with a shorter flange focal distance. This means you can get high quality professional lenses that are much smaller than ever before! The MFT mount is very flexible and lets you utilise different lens adapters. You can get adapters for PL, C, EF and more.

So you can use lenses from manufacturers such as;

Images are programmed using a custom non‑linear 12‑bit space intended to provide the maximum amount of colour data and dynamic range. Unlike traditional RAW workflows that rely on LUTs which change the pixel data in a harsh way, Blackmagic RAW is non-destructive. It harnesses the power of metadata to guarantee that the artistic vision of the cinematographer is supported through to post production.

Most significantly, the free SDK lets third party software applications use the embedded sensor profile metadata if required, as well as Blackmagic Design colour science for predictable and precise image rendering that yields reliable colour throughout the whole pipeline.

Advantages Of RAW Formats With The Swiftness Of A Video Codec

Blackmagic RAW is a ground-breaking, next generation codec that gives you;

That means you get the quality and workflow advantages of RAW formats with the swiftness and ease of use of a video codec.

With Blackmagic RAW, you can choose compression levels up to an amazing 12:1 and still get striking images that can be used for feature films, documentaries or broadcast programming! When it comes to post-production, you get full control over RAW settings such as;

Flexibility Of Film With The Ease Of Video

The Blackmagic Pocket Cinema 4K features a full size 4/3 sensor that gives you 4096 x 2160 resolution with an incredible 13 stops of dynamic range for accurate digital film quality. Because it’s full size, the 4/3 sensor decreases crop factor, giving you a broader field of view. It also has dual native ISO up to 25,600 so you get amazing low light performance! The Blackmagic Pocket can record at up to 60 frames per second in 4K and up to a huge 120 frames per second for windowed HD.

The new extended mode gives you the flexibility of film with the ease of video, so you get great looking images without having to go to a lot of effort in post-production!