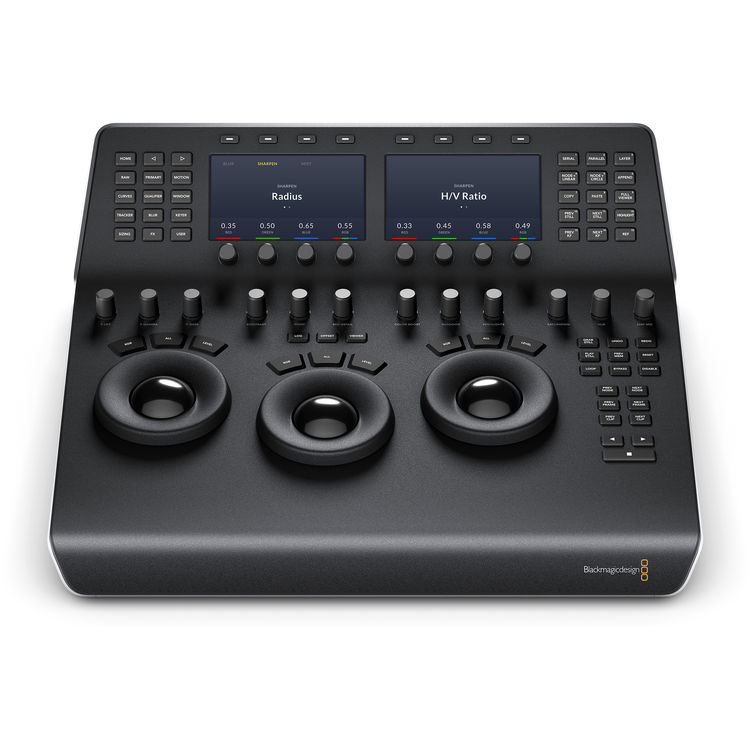 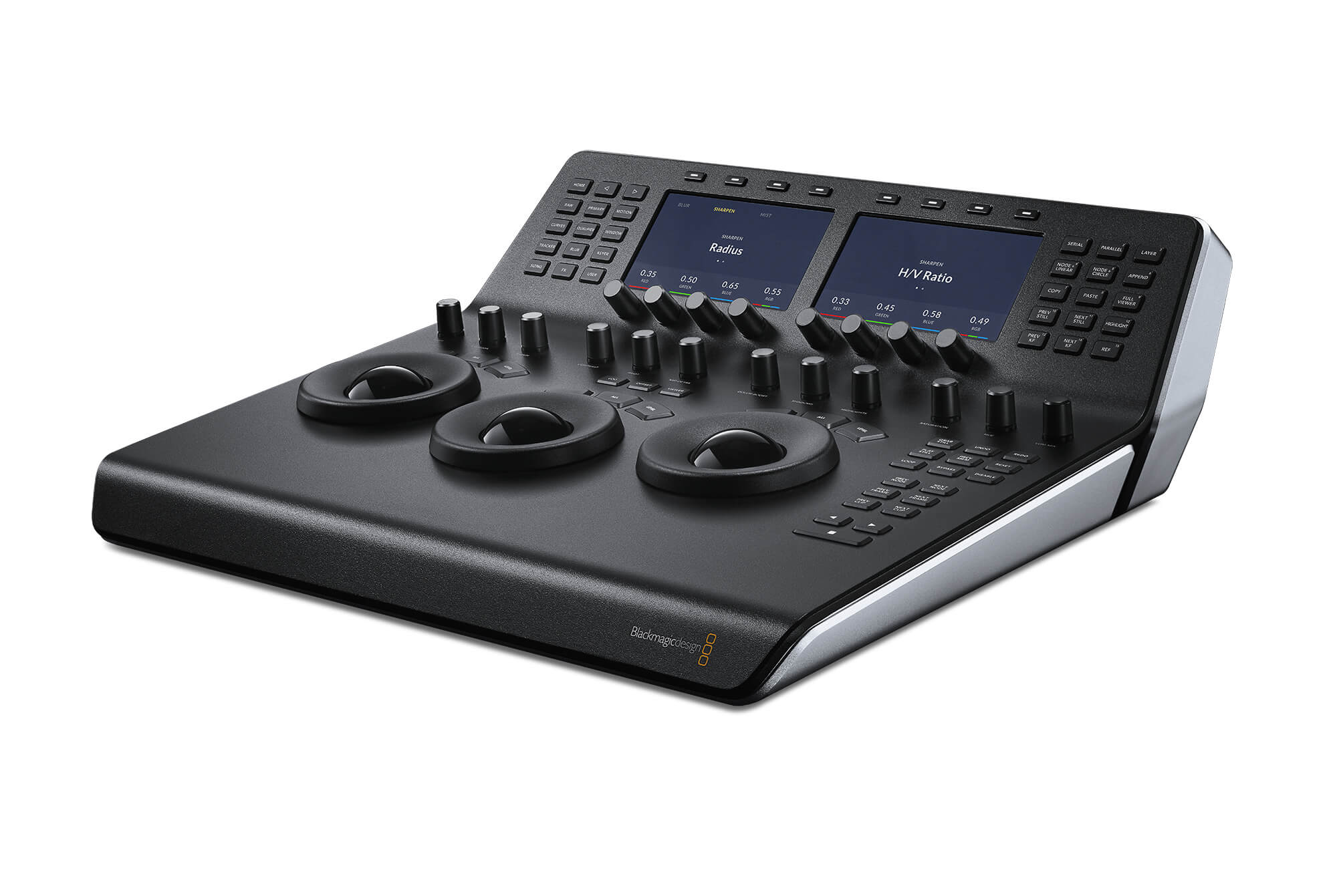 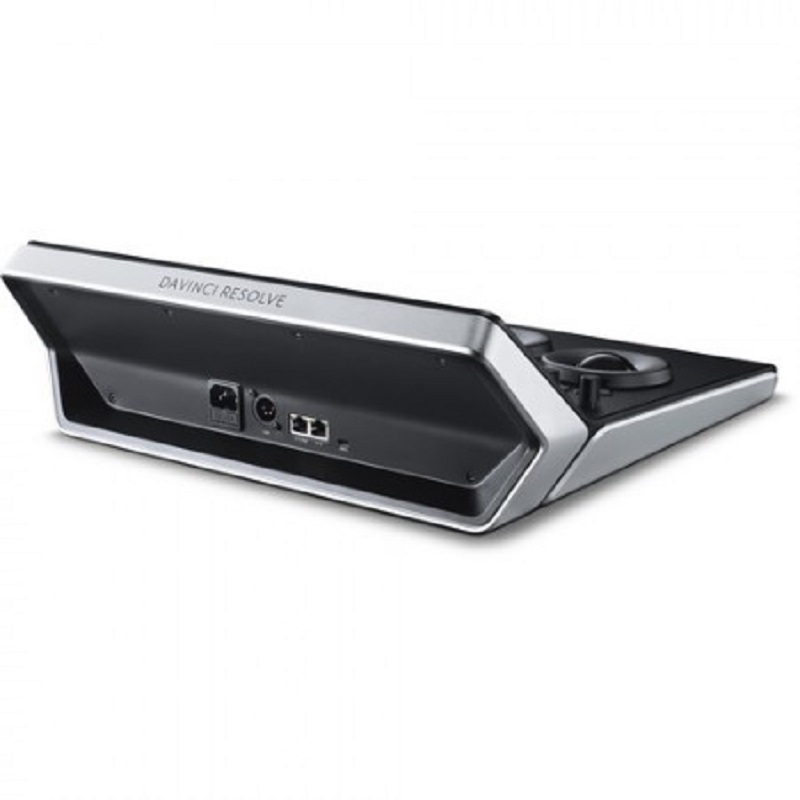 The Blackmagic DaVinci Resolve video editor Mini Panel is ideal for when you need to shift amongst colour and editing work, or for freelance artists that want a feature rich transportable panel that they can transfer amongst jobs.

The DaVinci Resolve video editor Mini Panel is a compacted panel that’s crammed with a huge blend of features and controls! Similar to the micro panel, you get three professional trackballs along with an assortment of buttons for navigating your node tree, adding colour correctors and swapping tools. It also features two colour LCD screens that display parameter settings, controls and menus for the selected tool along with direct access buttons that let you go straight to the menus for specific DaVinci features.

The DaVinci Resolve video editing software Mini Panel is perfect for colourists and editors that want to frequently shift between colour grading and editing, or for freelance colourists that want to take their panel with them when moving amongst facilities! The mini panel is also excellent for corporate and event videographers, colourists working on location shoots, houses of worship and more!

Work Quicker And Keep More Artistic Control Than Ever Before With Professional Hardware Control Panels!

Whole worlds, galaxies far far away and striking locations are shaped on the stages and inside the computers of major Hollywood film studios. Keeping it all organised and making it look real necessitates the most authoritative tools and the highest quality image processing. While DaVinci Resolve video editor can be used as an impartial software tool, adding a hardware control panel allows you to work quicker than ever before, while also dramatically increasing your artistic options. Established in partnership with the foremost post production facilities around the globe, DaVinci Resolve video editing software control panels give colourists the control that they need to produce accurate images that make us have confidence in what we see on the silver screen and television!

Add Emotion To Your Images With Colour

DaVinci Resolve movie editor control panels are intended to provide you with fluid, pro-active control over several parameters at the same time, so you can work quicker and be more artistic. The hardware controls are located sensibly near your usual hand locations and are made out of the highest quality resources. You get smooth, high resolution weighted trackballs for making specific adjustments. All buttons, knobs and dials have been custom intended to feature the ideal amount of resistance, so you can precisely fine tune any parameter. Best of all, the hardware panels let you adjust numerous settings, such as Gain, Lift and Gamma simultaneously, giving you a level of artistic control that goes far past what’s possible with a mouse.

To take your colour grading to another artistic level, the DaVinci Resolve video editor Mini and Micro panels comprise twelve devoted primary colour correction control knobs. These are intended to make it simple for you to stylise the appearance of your images and produce accurate “film looks”. All dials can be pushed to instantaneously reset the control. That’s ideal for when you are trying a stimulating new style but get a bit lost. Just push the dials to reset!

Fine-tune the contrast of the image in the brighter areas, specifically in the Y (luminance) channel only. You can decrease hot shots or pull the whites to make the shot look more angelic!

Changes the centre of tonality about which dark and bright parts of the image are stretched or lessened during a contrast alteration.

Alter the contrast of the image in the mid-tone areas, precisely in the Y (luminance) channel only. This control aids in adding depth to shots, along with additional vibrancy.

Fine-tune the contrast of the image in the darker areas, precisely in the Y (luminance) channel only. This alteration is excellent for varying the black point without changing saturation.

Control the equilibrium amongst the YRGB modifications and Y only modifications made using the Y channel gain, lift and gamma controls in the primaries palette or the un-ganged luma curve.

Simply recover blown out highlight detail in high dynamic range media by lowering this parameter to accomplish a smooth blend between the recovered highlights and the unadjusted mid tones for a natural effect.

Alternates all hues of the image around the complete perimeter of the colour wheel. The default setting is 50, which retains the original unaffected dispersal of hues.

Decreases or increases overall image saturation. At higher values, colours appear more concentrated, while at lower values colour intensity lessens and can be fine tuned until all colour is gone, leaving a grayscale image.

Naturally increase the saturation in regions of the image with low saturation while leaving appropriately saturated areas untouched. From time to time denoted as a vibrance operation, this is excellent for adding colour without over saturating the image.

Power Options That Are Flexible

The DaVinci Resolve video editor Micro Panel is completely powered via USB so you can just plug and play to get up and running. Power over USB means you can use it with a laptop and it will function from the laptop’s battery, making it perfect for on set grading. The DaVinci Resolve video editing software Mini Panel also comprises ethernet so it can function via your network, making it excellent for bigger facilities. Plus, the ethernet PoE support means it can even power itself via the network connection so you don’t need to plug in the power connection!

The DaVinci Resolve video editor Advanced and Mini panels comprise devoted feature buttons that let you swiftly switch tools so you don’t have to shift back and forth amongst the panel and mouse. With the press of a button you can effortlessly access tools such as;

The stop transport, play forward and reverse keys on all the panels allow you complete control of your deck or project timeline.

Trackballs provide RGB balance adjustments for Gain, Lift and Gamma; each with a principal level control. The trackballs can be set to function in whichever RGB or log with the touch of a button.

With eight customisable soft knobs on the DaVinci Resolve video editing software Mini Panel, you get super high resolution, flexible parameter modifications that you can re-tune back to the default with a easy push.

The buttons and keys on the DaVinci Resolve movie editor control panels illuminate when selected so you can effortlessly see which controls are active. On the Mini panels, the keys are also backlit, making it simple to visibly see each button in a weakly lit suite!

Displays That Are High Resolution

The DaVinci Resolve video editor Mini Panel feature bright full colour displays permitting complete control over the huge creative toolset built into DaVinci Resolve movie editor. The displays show menus for the soft knobs and soft keys, as well as graphic feedback of the knob tunings in real time. Menus update to the present toolset robotically as you use DaVinci so you get the swiftest and most direct keys to each feature and you never lose time searching through lengthy complex menus.